Deep Dive with the Deities! 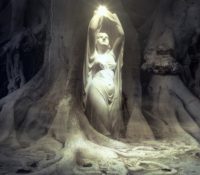 Join me for this experience, “Deep Dive with the Deities”!
This will be a fully immersive experience to learn about and connect with powerful guides and Master Teachers for guidance, soul remembering, and wisdom to illuminate your path!
On this day, we will be spending time with…
Hecate: HEKATE (Hecate) was the Greek Goddess of the three paths, guardian of the household, protector of everything newly born, and the goddess of witchcraft, the night, moon, spirits and necromancy. She was a widely revered and influential goddess and the only child of the Titanes Perses and Asteria from whom she received her power over Heaven, Earth, and Sea!
Psyche: The Greek goddess Psyche started life as a beautiful mortal and became a goddess when Zeus, the ruler of the Olympians, ordained her marriage to Eros, the god of love who was the son of Aphrodite. Psyche had to prove her worth to her mother-in-law, the goddess Aphrodite, by accomplishing a series of dangerous feats that were seemingly impossible.
By successfully learning the lessons these tasks required, the Goddess Psyche embarked on a remarkable journey of self-discovery and personal growth that earned her the respect of all the gods and goddesses on Mount Olympus, not to mention the respect and undying love of her husband!
.
Nut: The Goddess Nut (pronounced Newt) was the Goddess of the sky and heavens. She was the daughter of Shu, god of vital breath, and his wife Tefnut, goddess of heat. She was usually depicted as a woman bent over Earth with her head in the West and feet in the East. She was part of one of the theories of the origin of the Universe! The ancient Egyptians believed that she protected the Earth deity Geb, her husband, from the night sky. Myths also state that the sun deity Ra traveled through her – she swallowed him at night and then gave birth to him every morning to protect him!
Oshun: Oshun—the goddess of love, beauty, and fertility—is one of the most adored in the Yoruba religion. It is said that her sweet and fertile waters brought life back to humanity. It’s no coincidence Oshun is also the referred to as the queen of the witches: She is a teacher of both magick and mysticism. Oshun loves casting spells, especially those related to romance and seduction. She is the granter of wishes and all of your heart’s desires!
The Morrigan: The Morrigan was known as the mysterious Morrigan Celtic queen! An extremely powerful Goddess, she was a shape shifter and was associated with war, death (not always physical death but the death of ego and what doesn’t serve!) and destiny. She is most notably associated with the crow or ravens.
The Zorya: The Zorya Slavic Goddesses known as the guardian goddesses, three sisters: Zorya Utrennaya; Lady of the Morning Star, Zorya Vechernyaya; Lady of the Evening Star, and Zorya Polunochnaya; Lady of the Midnight Star. They were said to protect the stars and the constellations so that the Universe could continue to live!
So, How will we connect with these supremely powerful Deities? Each Goddess Deity is connected to and associated with different elements, animals, stars, and other such magick. As a group, we will invoke each one and hold space for them using the magick I will guide us all through! We will channel the guidance, healing, and activations they have for us!
To recap, here is the agenda:

These goddesses have been speaking loudly to me in my meditations, my client sessions, and my intuitive art…I can’t wait to share all of this magick with you! Are you ready for this amazing experience??

The investment for this retreat is $222 per person. I AM ONLY ACCEPTING 3 GUESTS PER WORKSHOP to maintain safe distance and provide a deep immersive experience!